Labrador coat colors made simple!  Find out how we get chocolate, black or yellow puppies and what color pups we might get when we mix Labradors of different colors.

Strictly speaking, there are only three different types of Labrador color: black Labs, brown Labs (usually referred to as chocolate) and yellow Labs.

In practice, there is a wide range of shades of yellow Labrador color, from palest cream to richest fox red.

But what makes a Labrador brown, or black, or yellow.  And what about Silver Labradors? Where does this new and controversial coat color come in to play?

I’ll be answering your questions on what color puppies we can expect when we mate together two Labradors in any of the different color combinations.

And I’ll also explain the genetic code that causes each of the colors in the first place.

I’ll try and keep it as simple as I can!

Understanding how a Labrador’s coat color is inherited starts with understanding how the three basic colors are passed on from one generation to the next.  So we’ll tackle that first.

Where do Black and Chocolate Labradors come from? 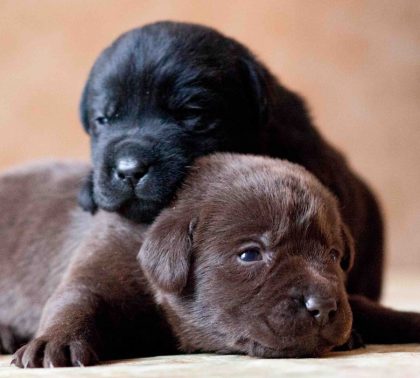 The information that determines whether or not your Labrador is basically black or basically chocolate is passed on through a pair of genes.

We can call these the ‘bee’ genes.

Every Labrador dog inherits two ‘bee’ genes, one from each parent.

There are two types of ‘bee’ gene.

Let’s look at those in more detail – I’ll explain how they influence the color of your dog’s coat.

Why black is a dominant color: 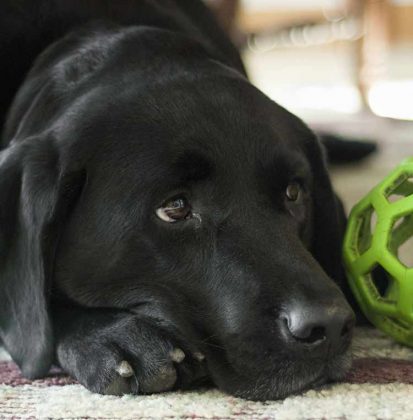 It is normal for dominant genes to switch off, or over-ride, recessive genes.  And that is exactly what happens here.

A dog with BB genes will be black, because he has no little b gene, the one that gives us a brown coat.

But a Bb dog will be black too, because if the dominant black gene is present, it switches off the brown gene.

How chocolate Labradors are made: 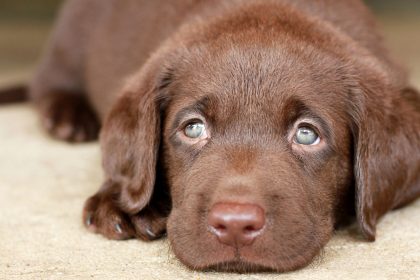 Even though a dog inherits a little b gene, the dog will only appear brown if no black gene (B) is present at all. Here are those three possible combinations of ‘bee’ gene that a dog could inherit again, with the coat color that results.

Remember that the black dominant gene always switches of the brown gene, so only the dog at the bottom will actually look brown.

Generation after generation of black dogs can continue to have only black puppies if dogs with the Bb gene are only ever mated to dogs with BB genes.

Remember, the dog in the middle of our list above will look black, but pass the brown gene on to about half of all its offspring. But things are never that simple are they? Because of course some Labradors are neither black nor brown.

How yellow Labradors are made: 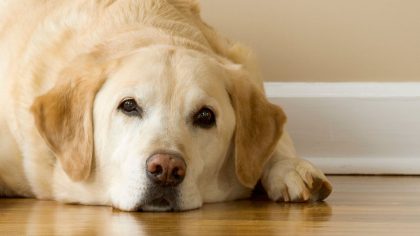 So having told you everything above, I’m now going to confuse the issue, and tell you that there are times when a BB, or a Bb dog will not be black at all

And when a bb dog won’t be brown!

The genetic information that creates a yellow coat comes from another pair of genes altogether.

We can call these the ‘eee’ genes.

And these genes have a different kind of power.  They have power over the ‘bee’ genes.

How yellow can over-ride black and chocolate

Little eee genes are able to influence or in certain cases to ‘switch off’ the ‘bee’ genes that cause black and brown coats. Each dog inherits two ‘eee’ genes, one from each parent. There are two types of ‘eee’ gene.

But little ee is recessive, and if the dominant E gene is present, it switches off the masking gene.

It only takes one big E gene to do this.

So the dog will only appear yellow if no big E gene is present at all.

Each dog inherits one of these ‘eee’ genes from each parent. There are three possible combinations of eee gene that a dog could inherit. It could have

Only the middle of these three dogs will be yellow. In the first and third dog, the E gene will switch off the e gene, and the dog’s color will be determined by its ‘bee’ genes.

Don’t forget these are different and additional genes to those responsible for black and brown. Each Labrador born has a combination of ‘eee’ and ‘bee’ genes. There are nine different possible combinations.

Predicting the color of Labrador puppies: 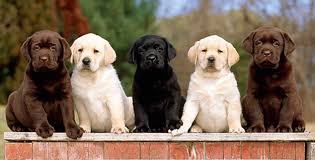 Trying to work out what colors Labrador puppies will be is difficult without knowing the parent’s genotype.

The fifth dog down the list is also black but he could throw yellow or brown puppies.

Two yellow Labradors mated together will never throw brown or black puppies.  All their offspring will be yellow.

This is because yellow dogs do not possess the big E gene which is needed to switch off the masking effect. 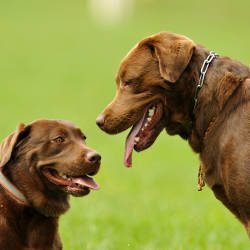 Two brown dogs mated together will never throw black puppies because brown dogs do not have the black gene.

But two chocolate dogs can produce yellow puppies, if each of the parents carries the little e gene – see the bottom right hand box below. 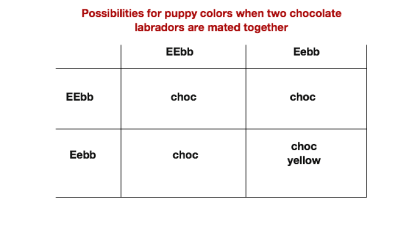 The color of puppies produced by other color combinations of parents are a little more complicated.

It all depends on the genotype of the dogs involved.  Let’s look at a few more examples

Can two black Labradors have yellow or chocolate puppies?

Depending on their genotype, two black Labradors can indeed have yellow or chocolate puppies.

Remember from our grid above that there are four different possible genotypes for a black Labrador.   The genotype refers to the genetic code that the dog carries.

Four ways to get black 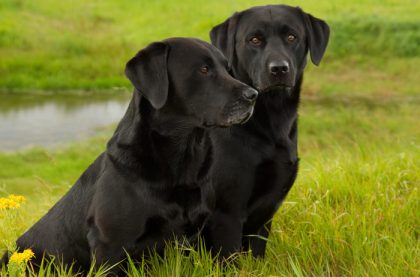 In the diagram below, I’ve put the four possible genotypes along the top to represent one parent – the mother for example.  And the four different possible black genotypes down the side to represent the father.  Inside the grid are the puppies that could be born from each combination.

If and only if,  both of them carry one little e gene, then some of the puppies may be yellow.  Remember that your puppy needs two little ee s (one from each parent) in order to be yellow.

If only one of the two black dogs carries the little e gene, all the puppies will be black, but half will carry the yellow gene, this is how the color can skip a generation 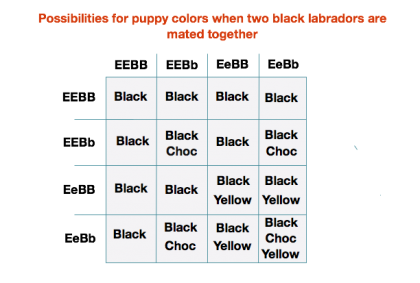 The same with the little b gene, if both of the black Labs carry one little b gene, around a quarter of the pups could be chocolate, depending on whether or not the double ee gene over-rides the bee combinations!

Is it possible to get all three colors from two black dogs?

Yes it is, check out the bottom right hand square in the diagram above.  Notice that it can only happen if the two black dogs have this genotype: EeBb

In other words, they both carry a little e and a little b

Mating a yellow Labrador with a chocolate Labrador: 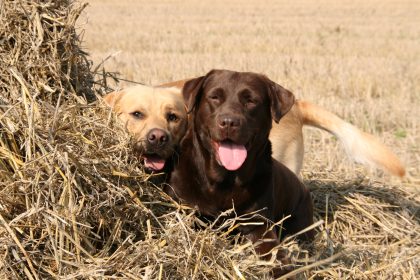 This is good example of how complicated, and unexpected, Labrador colors can be.  There are six different possibilities for litter color combinations depending on the genotype of the parents.  You can even get a litter of all black puppies from a chocolate mother and a yellow father (or vice versa)

Here are the color possibilities

Let’s have a closer look and find out why – in the diagram I have put the yellow Labrador possible genotypes along the top, and the chocolate genotypes down the side. 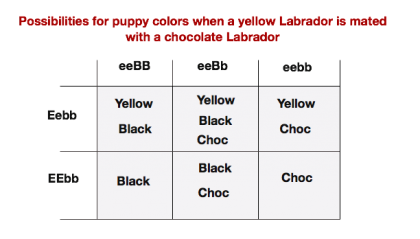 There are three ways to be yellow, and only two ways to be chocolate. A chocolate Labrador can be either Eebb or EEbb. That’s nice and simple.

A yellow dog can be one of three different genotypes: eeBB, eebb, eeBb – because anytime two little ee s come together they switch off the three different possible combinations of bee genes.

So, if you look at all the possible color combinations you’ll find that there are possibilities for all three colors in a litter of puppies from eeBb mated with  Eebb

Whereas if we mate EEbb with eeBB all the puppies will be black, because they will all have one big B and one big E 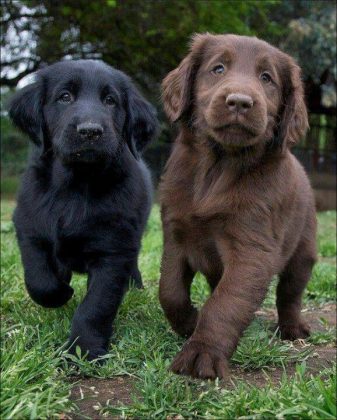 Let’s have a look now, at what happens when we cross a black Labrador with a chocolate Labrador.

We’ve seen that there are four different ways to be black, but that chocolate dogs only come in two different genotypes.

That gives us 8 potential outcomes.  The chart below has the different black Labrador genotypes along the top, and the chocolate genotypes down the side. 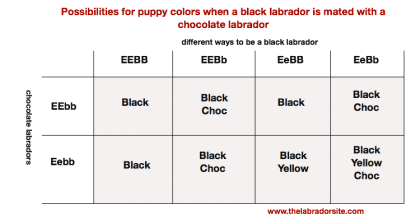 Because there are four ways to be black and three ways to be yellow, there are quite a variety of color pups for a mating between a black Labrador and a yellow Labrador. 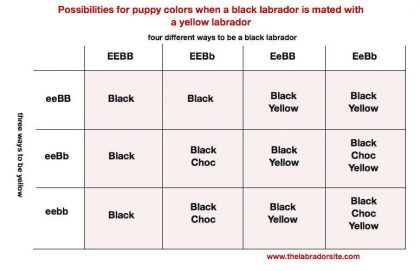 What about silver Labradors? 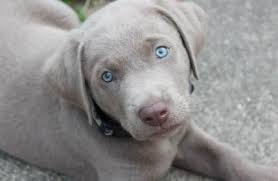 Last but not least, you may want to know how silver Labradors get their coat color.

There is another pair of genes involved which we haven’t looked at in this article, and that is the ‘dee’ genes.

These D genes have the potential to over-ride all the other colors, albeit in a subtle way.

When two little dd genes are paired together they dilute the coat color of the Labrador that carries them.

In a black dog this gives a softer, charcoal coat color, in a yellow dog a paler ‘champagne’ yellow, but in a brown dog, the result is the striking silver coat that is currently causing such controversy among Labrador enthusiasts.

It isn’t unusual for people to be quite surprised by the color of the puppies in a litter that they have bred.

But as you can see, colors and indeed other inherited characteristics like certain diseases can remain hidden from one generation to the next.  Potentially for many generations in a row if they are carried on a recessive gene.

And if you think Labrador genetic is complicated, try working out the genotype of a cocker spaniel. 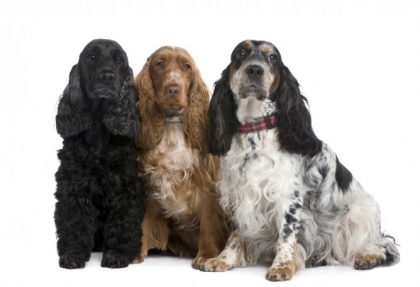 It comes in a veritable myriad of different color combinations.

It is enough to make your head spin!