Grain Free Diets and the increased incidence of Dilative Cardiomyopathy in Dogs:

While Dilative Cardiomyopathy (DCM) is a known problem for certain dog breeds, researchers are finding a correlation between feeding grain free diets and developing DCM in other breeds not predisposed to the condition.  DCM is a disease causing the heart to lose its strength and no longer be able to sufficiently pump blood to the rest of the body. The numbers afflicted aren’t huge relative to the dog population in the country but nevertheless we recommend most people move away from any of the foods the FDA has found to be most commonly associated with developing DCM and instead feeding a conventional dog food with grain.  This is far simpler and less expensive than trying to obtain a dog’s taurine level (which might be involved in the development of the condition) or supplementing taurine which may help but not with certainty.  It may be that something in these grain free foods makes taurine biologically unavailable.

Below is a chart released by the FDA of the dog food brands most frequently fed in DCM cases reported to them:

The only dogs we really recommend go to a grain free diet are those which we are actually trying to see if there is a food allergy and moving the dog to a novel protein such as rabbit or venison along with an unconventional carbohydrate source like peas or potatoes.  This wouldn’t apply to most of our dogs.  Some pet stores have promoted grain free diets as inherently better than those with grain even though there is no evidence to support this.

We also recommend feeding dog foods from larger companies with recognizable names that are known to have a history of research and feeding success over many years.  Examples of these are Iams, Purina, and Pedigree, among others. This recommendation is consistent with advice from Dr. Lisa Freeman, a veterinary nutritionist at Tufts University, who advises owners reconsider feeding boutique brands, exotic ingredients, and grain free ingredients or what she calls BEG diets.

Please feel free to ask us any questions about cardiomyopathy, feeding recommendations, or anything else you’d like to discuss!

We’re in prime planting season! But before you start making beautiful new additions to your garden, please check out and bookmark this link to the ASPCA’s list of toxic and non-toxic plants.

Foxtail plants can be risky for your dog. The barbed seed heads of the foxtail plant can work their way into any part of your dog or cat, from the nose to between the toes and inside the ears, eyes and mouth. They can even simply dig themselves directly into a patch of skin.

The foxtail plant is a grass-like weed. It is mostly found in the Western half of the U.S.

The danger of foxtails goes beyond simple irritation. Because these tough seeds don’t break down inside the body, an embedded foxtail can lead to serious infection for your dog. It can even lead to death if left untreated. The seeds can be hard to find in your dog’s fur.

So how can you tell if your pooch has a foxtail that’s causing problems? If you find a foxtail should you extract it? And when is it time to call a vet?

Foxtails and Your Dog: Risks and Symptoms

Foxtails travel. Moving relentlessly forward, never back, they can migrate from inside your dog’s nose to its brain. They can dig through skin or be inhaled into — and then perforate — a lung.

Embedded foxtails can cause discharge, abscesses, swelling, pain, and death. If your dog is displaying any of the following symptoms, check for foxtails or talk to your vet:

Any dog can get foxtails in the ears, nose, eyes, or mouth. But dogs with long ears and curly hair can be especially prone to foxtail problems. Prevent issues by:

The easiest way to prevent foxtail problems is to keep your dog out of overgrown, grassy areas. You should also pull out any foxtail plants you find in your yard. Also consider trimming your dog’s fur during foxtail season, especially if it tends to persistently get foxtails in one spot. 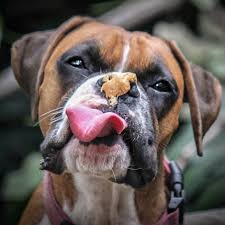 Xylitol can be found in certain peanut and nut butters.

The natural sweetener (also commonly found in sugarless gum) is known to cause hypoglycemia and hepatic necrosis in dogs.

Xylitol, a natural sugar alcohol sweetener popular for its low glycemic index but known to cause hypoglycemia and hepatic necrosis in dogs, is now also found in several specialty peanut and nut butter brands. Nuts ‘n More, Krush Nutrition and P-28 Foods all make peanut butter and nut-based spreads containing the ingredient. Though xylitol has been popping up in all kinds of foods and dental products in the last several years, peanut butter is a special concern, says Ahna Brutlag, DVM, MS, DABT, DABVT, associate director of veterinary services for Pet Poison Helpline and SafetyCall International. “First, dogs fed straight peanut butter as a treat or fed treats baked with xylitol-containing peanut butter may certainly be at risk for harm,” she says. “Second, a dog that nabs the entire jar of xylitol-containing peanut butter and happily gorges on his or her treasure without anyone knowing could quickly become extremely ill. If this occurred during the day while the owners were not home, it’s possible the dog could die before people returned.”

So far, mainstream peanut butter brands haven’t started using xylitol—only the three specialty brands include it in their formulations.

Brutlag is urging pet owners to be vigilant about checking labels and looking for keywords that can indicate that a food contains xylitol. “The most obvious thing to look for is the word ‘xylitol’ itself. It may be prefaced or followed by clarifying words,” she says.

Something else to check is whether the packaging says “sweetened naturally” or that it uses a “natural sweetener.” Brutlag says, “It’s a common misconception that xylitol is an artificial sweetener—but it’s not. It’s normally found in small amounts in fruits and vegetables, so if you see those terms, look deeper to see if xylitol is listed. Chemically, xylitol is classified as a sugar alcohol, so this is another phrase to look for.”

Other sugar alcohols, such as erythritol, glycerol (also called glycerine), maltitol, mannitol and sorbitol are not known to be toxic to dogs; however, some food labels do not list the specific sugar alcohol used. “When in doubt, if you want to feed a product to your dog that lists ‘sugar alcohol’ as an ingredient, but doesn’t list which one, don’t use it,” Brutlag advises. Because xylitol and other sugar alcohols are not technically sugar, they may also be found in products labeled “sugar free” or “no sugar added.”

While it seems unlikely that xylitol will become so mainstream that it begins to replace sugar in most foods, it’s very likely that more products will contain it, which Brutlag says has been the trend for several years.

Our mission is to provide veterinary care in a relaxed, professional, welcoming setting. We look forward to meeting you and your pet, earning your trust, and exceeding your expectations.

Maple Leaf Vet Clinic is the quintessential neighborhood clinic that you should take your pets to.